- March 30, 2016
During my A Level studies, my Geography class went to Chester (a northern city of the UK) for a week of fieldwork. One of the key aspects we studied was the historical determinants of the present day town plan.

We considered how the raw materials present in the locality, as well as the depth and navigability of the River Dee, helped to make the site a good one for initial settlement. We discovered how the walls built by the Romans had enabled and constrained the development of the settlement. We thought about how the Mediaeval additions were in part informed by what their Roman predecessors had left behind, and how they added to the existing spaces with their own built structures. This process of remoulding and remaking the built environment continues to to the present day, presenting us with the modern, taken-for-granted forms of the cities and towns in which we dwell.

Our A Level class was given a theoretical approach to help us analyse the town plan which we then matched to our observations in the modern city to evaluate its applicability. I want to take this theory, explain it, and then make some applications to sociology which I think are apposite. Conzen's method of town plan analysis relies upon three nested levels of evidence. These are...

This tends to be the most fixed and durable feature of a settlement. This may be seen in the road layout, the location of the walls, the gates to the city and their associated trade routes, the location of the cemetery, and so on. This layer of analysis can tell us most about the past as the forms we see grow out of the historical.

The buildings in a city or town tend to be constructed according to the existing town layout. That is, they are built along, between or away from existing routes and obstacles, thus preserving or solidifying those obstacles in their place. It becomes extremely difficult to remove a road from its place once buildings have been placed along both its sides.

3. The land use & pattern of land use

Once the buildings are in place, their use is often the most changeable. It is substantially easier to change a shoe shop into a bakery than it is to build a brand new store. Even though they were built for purpose originally, the buildings come to constrain their users and delimit their uses.

And so to Sociology...

This is a somewhat lengthy preamble in order to draw a parallel between the Geography of space and place, and the necessity of a similarly-layered understanding of social reality. (Of course there is a whole discipline of social geography over which I've leaped, but so be it for now.) 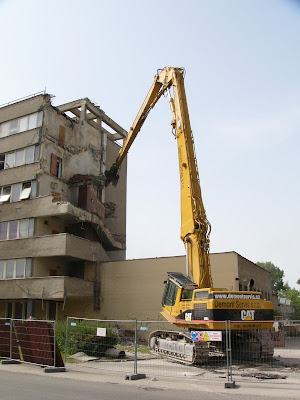 Firstly, we are born into existing social structures which we have not shaped nor yet had the opportunity to contest. In this level of analysis we might place notions such as race or class. These often seem to us to be natural, because we have never known any different. These structures are the 'town layout' of our social milieu: they constrain our path and are extremely durable to change except for great and fundamental upheaval. Enduring such upheaval would be comparable to the bulldozing of a entire city precinct or quarter. Not likely to happen, and certainly not without substantial cost and disruption.

Built along the road (structures) and dependent upon its constraints, we have a number of semi-permanent forms of social life, such as families, employment, schools, all of which provide locations for human congregation and social interaction.  We often refer to them as institutions and these tend to be less permanent than the structures around which they build, but also reproduce them by drawing from and depending upon them. We move in and out of these as we require, and assume our doing so is entirely of our own choice. Patterns in our social life are produced and reproduced, and, by virtue of the shared underlying structures often turn out very similar to others.

Finally, at the most fluid level we have the social behaviours of individuals, which are comparable to the ever changing and dynamic land use of the buildings in the town. If we are critical, we might see behaviours as being informed and influenced by more permanent and durable underlying structures. This undoubtedly takes place mostly (but by no means exclusively) beneath the conscious level, in much the same way as when I sit in a revamped coffee shop I am not likely to think much about the Roman road layout, and even less am I likely to think about how those two things are related.

But they are related, and so a robust sociology should be able to move between these nested layers of analysis from personal biography to social history, from individual experience to grand narrative, with ease.

Nature is no figment

What pleases me about this explanation is that there is room for an understanding of the role of 'nature' in the formation and structuring of the social reality we see in the present. I mentioned above that the natural environment is a precursor to the built environment. This is the point I would finally like to stress in application to sociology.

Much of the historical development of a town is dependent upon the natural features of the landscape, as I have tried to show by reference to Conzen. I would contend that, within sociology, natural features of human being are not to be dismissed. Rather, it is important to ascertain what elements of nature are rightly so-called and what elements are simply social constructs masquerading as 'nature'. Nature (not supposed but actual) has implications for the very structuring of society. Indeed, for a Christian labouring in social thought, here is the rub.

A robust distinction here enables me to pick through the tricky sociological and theological issues around race, gender, sexuality, disability and so on, and it enables me to do so without either accepting all of these notions as socially constructed or accepting them all as natural. To do either would be weak and uncritical. The implications then are multifarious and profound, and will have to wait for another post.
Agency Structure Theory