Showing posts from September, 2015
Show All

Do Protestant Christians today apply a 'work ethic' to their sporting endeavour? In this post I'll briefly be considering the possibility of a Protestant Play Ethic. Weber's Thesis Max Weber's Protestant Ethic and the Spirit of Capitalism remains a seminal text in the field of sociology, by virtue of the audacious range of his thesis as well as the subtlety and carefulness of his explication. Put crudely, Weber argued that Calvinism (a branch of Reformed Protestant Christianity) provided a worldview suited to the development of modern world order, and that this accounted for the rise of capitalism in Germany and much of Western Europe, rather than in Japan, for example. Critiques of Weber's thesis, including my own in a previous post , are numerous, varied and often contradictory. (For more on these contradictions as well as a synopsis of these critiques see Giddens' introduction to the 1976 edition of the English translation of The Protestant Ethic)
Read more 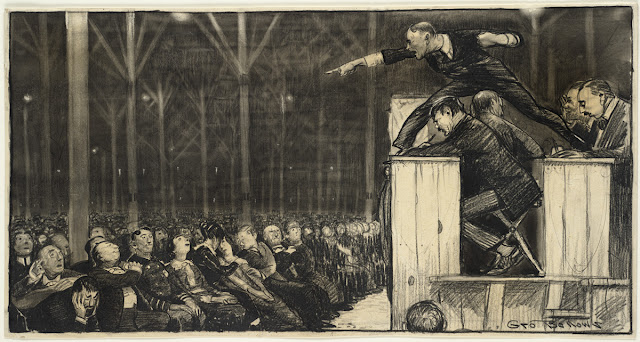 "Preaching" by BPL - originally posted to Flickr as Preaching. Licensed under CC BY 2.0 via Commons - https://commons.wikimedia.org/wiki/File:Preaching.jpg#/media/File:Preaching.jpg Billy Sunday was a preacher and a Baseball player and one of the most powerful men of his generation. Born into poverty in 1862, his father died when the young William Ashley Sunday was just five weeks old. His mother, who, after a few years of support from her father, could no longer provide for her children, sent Billy and his elder brother to an orphanage in Iowa. Billy was fleet of foot and athletic as a young man and made his way into professional baseball with the Chicago White Stockings (now the Cubs) by the time he was 21 years old. He was reputedly the first man to round the bases in 14 seconds flat, and held the record for stolen bases for some years until it was surpassed by the legendary Ty Cobb.
Read more
More posts