The changing design of Barcelona's club badge teaches us about how sport is an integral part of wider society, not simply a meaningless addendum.

In 1899 at the club's founding it was decided to use the city coat of arms as the club's badge. FC Barcelona's regional ties have long been a fundamental part of its identity, and when the club produced its own unique badge in 1910, key symbolism from the city's crest was retained.

The Cross of St. George

St George, is not only the patron saint of England, but also a significant icon in numerous regions of Spain. In Catalonia, as in England, he is the noble slayer of dragons, the moral crusader, the rescuer of damsels; in short, God's man on the earth. In a culture saturated with Catholicism the symbolic act of wearing George's cross is of great relevance. The selection of the Cross to form the Barça crest is a means to tie the club to a heritage which - albeit mostly invented - enables the continuation of a narrative. That narrative, of the valiant vanquisher of evil, is brought into the present and informs the strong sense the club retains as a moral force.

In Catalan, George's name is quite different to the Spanish. While the Spanish call him Jorge, the Catalans call him Jordi. But what's in a name? Quite a lot, actually. During the period of the Franco dictatorship, in an attempt to repress what the Spanish government saw as dangerous separatist culture, parents were prohibited from giving their children Catalan names. One of these was the regional version of the name of St George.

In 1974, while Franco was still in power, Johan Cruyff famously proclaimed his loyalty to the region by naming his son Jordi. In order to bypass the legal restrictions Cruyff's wife Danny went back to Amsterdam to give birth. The significance for the people of Catalonia was enormous. Johan Cruyff's own progeny would, in a show of solidarity with the separatists, carry the name of the region's patron saint.

The Catalan flag, known as the Senyera, has the nickname 'the four bars', and consists of four horizontal bars of red against a yellow background. This flag was the standard of the King of Aragon, one of the largest and most powerful regions of medieval Iberia which was subsumed into the nation of Spain. It is still apparent in the Spanish coat of arms. 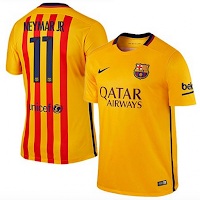 However, the historical ramifications of a begrudging Spanish unity lingered and surfaced again to foment the Spanish civil war (1936 to 1939) in which the Second Republic was overthrown by General Francisco Franco's army. Franco was dedicated to the idea of Spain as a monarchy.

Separatist sentiment amongst the people of Catalonia is still very strong, and the Camp Nou - home of FC Barcelona - has become a space for symbolic solidarity and resistance against the historic oppressor. The use of the Senyera is a means to reconnect to the history and culture of Catalonia, and to imbue the sporting spectacle with a greater significance. To this end the Barcelona second kit makes use of the four bars as the critical element in its design.

The importance of this symbol was not lost on Franco. When he came to power in 1936 it was not long until the Senyera was removed from the Barça badge. Franco also prohibited the display of the Senyera at Barca matches. Displays of power include the appropriation and subjugation of meaningful symbols, and Franco's government ordered the four bars to be reduced to two. In forcibly altering their club's badge, Franco intended to assert his power over the Catalan people. 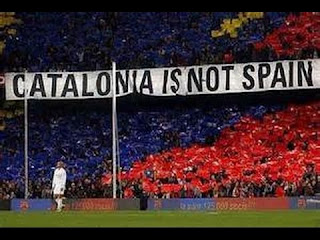 From 1910 onwards the gold band in the centre of the crest bore the letters FCB, representing the Catalan Spanish version of the club's name. However, language - and dialect in particular - is heavily value-laden, and this is true in Spain. The Catalan dialect itself is a cultural artefact and its use is representative (and constitutive) of the associated culture, region and people. Franco rescinded official recognition of Catalan as a state language, in favour of the more formal Castillian Spanish of the ruling elite and monarchy.

Consequently, in 1941, at the outset of the Franco era, the club was compelled to change FCB to CFB, to reflect this changing political landscape in Spain. The letters - in formal Spanish - stood for Club de Fútbol Barcelona.

In 1974 in the General's twilight years, the Barcelona badge reverted to its pre-Franco state; the Senyera, the Cross of St. George and the letters FCB were again emblazoned proudly on players' shirts as they had been in 1910, in symbolic defiance of Franco, the monarchy, and the nationalists.

The legacy of Franco was finally erased from the badge; the nation, on the other hand, still bears the scars. 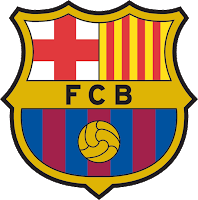