The Supremacy of Scripture and Francis Schaeffer’s Line. 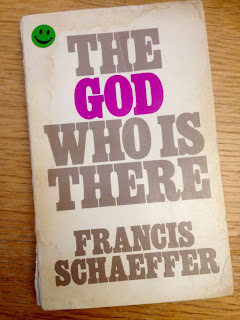 Francis Schaeffer’s The God Who is There is a favourite book of mine. In it he argues that Western man has, over a period of several centuries, become isolated from himself, from truth and from God because he has given up the search for coherence and unity in his view of his existence. Having done so, modern Western man has replaced the search for coherence with an acceptance of a dichotomy. The dichotomy is the dichotomy between the rational and the irrational, between the natural and the spiritual.

Schaeffer argues that this dichotomy can be understood to have produced a line between two separate and distinct realms of reality. Above the line there is religion, faith, spirit, and the unfalsifiable. Below the line there is man, matter, mathematics. Above the line is – in Schaeffer’s terms – the upper storey, below the line is the lower storey. But there is no real coherence between them, no verifiable contact, no true unity, no adhesions.

And so, modern man has no means for explaining – or even acknowledging – the supernatural that might form part of a coherent world, the world as it truly is. And this is problematic because this coherent world, this united reality of the natural and the supernatural is precisely the world as we all experience it. So, modern man, who thinks in terms of the line, kids himself either by declaring that there is nothing above the line, or more usually, that what is above the line is unknowable and grasped at only through the abandonment of reason; in which case, ‘each to their own’. Your guess is as good as mine. This is how we have come to the place where people will say 'I'm happy for you to have your religion, but keep it to yourself.' Modern man means to say 'your religion belongs in the upper story, don't try to bring it down here into the lower storey.'

In a culture built upon this line of thinking we would expect to see its fruition in a simultaneous rise of scientism and mysticism. This is precisely what we see in the West today. Scientism attempts to confine itself inside of pure rationality (the lower storey), while mysticism – with its face painted and shoes off – dances amongst the shadows of the irrational. But both acknowledge the line. Both rely upon a dichotomous view of reality in which there is no communication between the upper and lower storeys. There is a great gulf fixed.

The Bible proclaims no such dichotomy, but – in black and white – assumes and affirms the coherence between the natural and the supernatural, between the stuff and the spirit which animates the stuff. There are adhesions. There is no line. God is at work in the world.

Impact on the Church

So, with that groundwork laid, let us return to the first point, one that is most pressing for us Christians in our cultural moment. I say that the Christian church has abandoned the supremacy and infallibility of scripture while holding on to the doctrine. This is because the church has adopted the thought categories of modern man. It has accepted Schaeffer’s line. This is understandable – we swim in the same cultural waters – but it is not tolerable.

Western man insists that the things of religion – or what he calls religion – are all upper storey guesswork or mere acts of a will unfettered from reason, and this line of thinking has undoubtedly shaped Christian belief and practise in the early 21st century. The church has split in the same two directions as modern man, because the church is full of modern men and women. For many modern Christians rationality and reason have replaced the Scriptures as the ultimate guide to truth. And so, in practise, we have two kinds of modern Christians: upper storey Christians and lower storey Christians. Each of these groups has its own way of approaching the Bible but both are agreed the doctrine of the infallibility of the Scriptures now goes in the upper storey.

The upper storey Christians avoid being embarrassed about defending talking snakes and floating axe-heads – which are all a little too much for modern rational man – and tucks all this safely away up there above the line. They just go up there on a Sunday to play. It feels nice because up there in the upper storey the Scriptures are infallible. The upper storey Christian can continue to bellow ‘sola scriptura’ until hoarse, and feel ever so orthodox about it, because the rubber never needs to touch the tarmac. And so it doesn't really mean anything. These upper storey Christians have abandoned their felt pretence that their faith makes any rational sense down in the lower storey, because the Bible is not supreme in their epistemology. For them, reason is supreme. And so, if they want to hold onto the sense of the Bible's other-worldliness they feel they have no choice but to leave reason behind in their Christian practise and leap above the line, as Van Morrison once sang, into the mystic. I’m thinking of the kind of Christian who flicks through the pages, lets the book fall open, and takes a few verses as ‘God’s word to me today’. That is mysticism in Christian garb, and it won’t do.

Christians can claim whatever they like about the stuff up in the upper storey, and the modern man will let us, so long as we don’t try to bring it down here, into the lower storey. He’s happy for you to have your ‘sky fairies’ and your ‘magic book’. And too many Christians have conceded the ground, because they don't want to have to squirm in the presence of the gods of rationality. (These be thy gods, O Israel!) Too many have sold the shop. And all because to the modern man reason is supreme over revelation. These things ought not so to be.

I believe Schaeffer's assessment of the situation is correct and so we might say that there are three Bibles. There is the upper storey bible all mystical and floaty; we go to it when we need a charm, or some kind of potion for our ailments, but let us not pretend it speaks of objective reality (like science might). Then there is the lower story bible all dead, old and dusty; it has some truths in there, but these are rational universal archetypes couched in peculiar stories, not specific revelation from beyond the reaches of our finite reason. Last, there is the real Bible; the one God wrote as he moved holy men by His Holy Spirit. This is the Bible - the inscripturated Word - that is an integration point for a Christian's whole life in God's true reality where there is no line.

I know your church statement of faith affirms the supremacy and infallibility of scripture, and so does your pastor’s Bible College. But if that statement only holds above the line, you're at risk of losing contact with reality as God has made it. But the proof of the pudding is in the daily reading of, meditating in and preaching of that Word, unabashed and unabated and unapologetic. The book itself is a most critical integration point for your experience of reality, the lens through which all of life - the rational and the supra-rational - should be viewed. Be not faithless, but believing. Take up, and read.