Gianni on the spot? The Globalisation of FIFA.

- March 01, 2016
Gianni Infantino is the new boss at FIFA. The task of restoring faith in football's wayward governing body is, for Infantino, far from child's play. Now that the braggart Blatter is serving a 6 year ban from all football activities (recently reduced on appeal from 8 years) it would be nice to think that the opportunity for FIFA to make some long overdue and much needed changes will be grasped.

But the question simply is this: is the power to change FIFA genuinely in the hands of the president?

Long term historical process can be seen pulling at the structure and direction of FIFA throughout its entire existence. Globalisation theory posits several stages in world history which have seen the planet become ever more connected. We are growing closer to one another through the global interweaving of economy, politics, society and culture. All of this has been made possible by the unprecedented technological advancement of the modern era. Robertson (1992) suggested a 5 phase model of globalisation, more recently adding a sixth. These have then been applied to the globalisation of Football, by Robertson and Giulianotti (2009). The phases are as follows, with a few key events noted. (Space limits the possibility of detailing these). 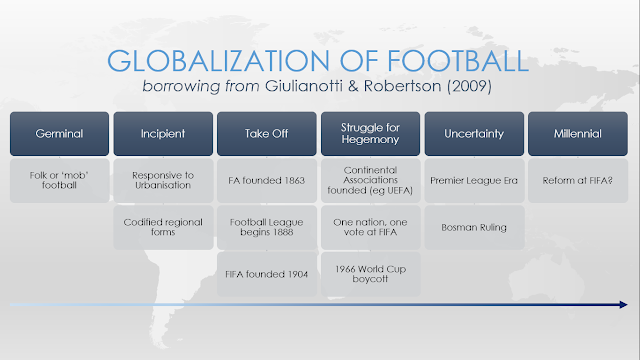 A step back into the FIFA annals may be of value here, as it helps us draw a trajectory into the present.

Sir Stanley Rous was the FIFA president between 1957 and 1974. He was old school: an English educationalist and sometime referee. He loved the game and wanted to protect it from the grubby fingers of politicians. He once wrote 'I do hope football never becomes anything other than a game'. Unfortunately, though he was savvy enough to see how easily football could become politicised, he was powerless to do anything about it. In his desperation to keep politics and football apart from each other he made some startling decisions, most notably defending the right of the South African association to be readmitted as members of FIFA during the apartheid era.

Joao Havelange, Brazilian businessman and son of a Belgian emigrant, knew how to curry favour. He used all of his business acumen and political savoir-faire to persuade the member nations of FIFA to give him the top job in 1974. He condemned the South Africans, and crucially garnered the support of the African federation which had - in 1958 - already removed South Africa from its own membership.

The fall of Rous, precipitated largely by global-scale geopolitical events (of which the apartheid controversy was just one case in point), was a watershed moment in the FIFA story. Ever since Sir Stanley's era came to a close, FIFA has been characterised by political manoeuvring. That's a full 40-plus years. That sort of corporate behaviour is, in my view, the underlying impetus for the recent transgressions, and is not soon overturned.

The power relationships between players, clubs, agents, national associations and federations which emerged during the late twentieth century have more or less become consolidated. As a result a global football/political class (i.e. FIFA et al.) has been produced to administer and sustain this network of relationships (as well as their own interests).

The millennial phase of globalisation is - against this backdrop - well under way, and there so far has been little evidence that the network of power relationships within world football is headed for substantial change. Infantino, the new man at the helm, has got some work to do.

The wider geopolitical context has had, and will continue to have, a profound impact on FIFA's structure, direction and ethos. The vast majority of this is outside of Infantino's control. He, like FIFA, is at the mercy of a process that has been gathering pace since 1492.

Of course Sir Stanley Rous knew all this but, in palming away political questions, failed to effectively lead FIFA through a tumultuous era in world history. Havelange on the other hand took full personal and political advantage, and brought football to the world. Infantino needs to ally the political know-how of Havelange to the moral (or apolitical) vision of Rous.

What FIFA needs therefore is a culture shift at every level of its organisation. FIFA must re-imagine itself, no longer as leader, but as servant or custodian of the beautiful game. Cosy power relationships need shaking up, and vested interests made explicit. Some of the reforms passed recently may help FIFA in this regard, such as the limiting of the President to 12 years in office and a "clear separation between political and management functions".

If he can deliver on all this, Mr Infantino may be able to occasion real and lasting change to the governance of football. It's a tall order.
Blatter FIFA Football Globalisation Infantino Soccer