To the Promised Land: Brazilian Footballers in Europe

The religious landscape of Brazil has undergone seismic change in the last few decades. Where once the Catholic Church held unquestioned primacy of position, the decline in her influence over the nation has been sharp.

It is claimed that in the 1940s 99% of Brazilians were Catholic, while the figure in 2013 was reported to be down to just 63%. In its place has risen the Protestant Church, and one broad denomination in particular - Pentecostalism.

The most followed brand of Protestantism in Brazil is a version of neo-Pentecostalism which lays a central importance on profound personal experience(s) of the Holy Spirit alongside the accumulation of material wealth as a sign of God's favour.
A Parallel

Interestingly there is a parallel here between the thesis underlying Max Weber's Protestant Ethic and modern Brazilian Pentecostalism: the accumulation of capital is seen as proof of divine favour. The difference however is the narrative provided to explain this accumulation.

In Calvinistic teaching (according to Weber, at least) God's saving election of each individual was demonstrated in the temporal world by material prosperity and this was to be achieved through hard work and asceticism. In much of Brazilian Pentecostalism, on the other hand, the receipt of earthly gain is a result of the overflow of God's love towards his people, who give faithfully to the ministry of the church in expectancy of abundant blessing. This is known as the Prosperity Gospel. 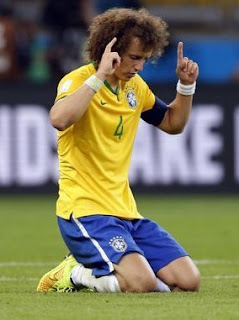 The Prosperity Gospel has powerful implications. It makes a link between God's favour towards a person and the success they experience in their earthly life. It teaches a very particular way of framing the world.

There are many reasons why Brazilian players are extremely common in European football. These reasons are cultural, economic, and historical. But perhaps there is one more critical aspect to consider: religion. In her work on Brazilian Diaspora, Professor Carmen Rial observed something peculiar: although it wasn't the intended topic for discussion, almost all of the overseas Brazilian players she interviewed spoke about their faith.

In migration theory the factors which influence the movement of players can be simply categorised as either 'push' or 'pull' factors. Here are a couple of factors that could be suggested with regard neo-Pentecostalism

The impetus to succeed as a young Brazilian Pentecostal is central to the living out of your faith. There is no more proof of success than a call to the footballing promised land: the big leagues of Europe. Average salaries in the Premier League, for example, have surpassed £2.2 million. As long as the South American leagues are seen as being of inferior quality to (and evidently less profitable than) those in Europe, there will always be a propensity for those players to move away to find greener fields and a fatter pay check.

If you believe that God is interested in blessing both you and your bank balance, He must be interested in taking you to play in Europe, the economic core of the Football World System.

Migration theory tells us that players thinking of moving will seek out familiar things - pull factors - to convince them that such a move is desirable and to help them feel 'at home'. For a Brazilian footballer whose faith is central to his life, one of those familiar things will be a local church and the community to which it provides access. Even better if there is a Portuguese speaking, Pentecostal church with other footballers in the congregation! The perfect example would be the large Evangelical Church in central Munich, founded by the Brazilian international footballer Jorginho.

Many a Brazilian Pentecostal footballer has come in search of God-given fortune in Europe's Promised Land *. Undoubtedly a key factor in this pattern of migration is the players' faith, and their desire to turn the football field into a mission field.