A Foreign Field: Why English Footballers Should go Abroad

- March 29, 2015
Greg Dyke believes the England football team would be stronger if more English players were playing the the Premier League (EPL), but his strategy is ill-founded and set to backfire.

The chairman of the Football Association has called for changes to key conditions governing home-grown players in the EPL. These include a redefinition of 'home grown' to mean players registered in England by their 15th birthday; a reduction (from 17 to 13) in the number of non-home grown players permitted in a club’s first team squad; and at least two of these home grown players to be club trained players.
The argument runs something like this. Since foreign players are filling up squad places, we should limit the number of foreigners in the domestic league. This allows more English players to get first team experience. Consequently, the England national team manager has more high-quality players to select from.

There are a multitude of problems with this view of things but let's stick with two for now.

1. Foreign players are not filling up squad places.
2. More players in the domestic league doesn't make the national team any better.

First, each Premier League club is permitted a quota of 25 players, with U21 players not counting toward the total. In February this year only 6 of 20 Premier League teams had filled their quota. (These were Villa, QPR, Hull, Palace, Swansea and Leicester - all the big guns!). The argument that English players are being blocked from reaching the first team by a glut of overseas players is a patent absurdity. There are places for English players - and places in the top teams - but English players just aren't good enough.

To force clubs to give more squad places to English players, in order to combat an imagined phenomenon, is a fast track to Premier League mediocrity - as Arsene Wenger rightly points out.

Secondly, in framing the issue in the way he has, Mr Dyke has perpetuated an assumption which has become almost axiomatic in the debate around the national team. It is widely assumed that numbers of foreign players in a domestic league have a direct influence over the quality of the national team. The data would beg to differ. 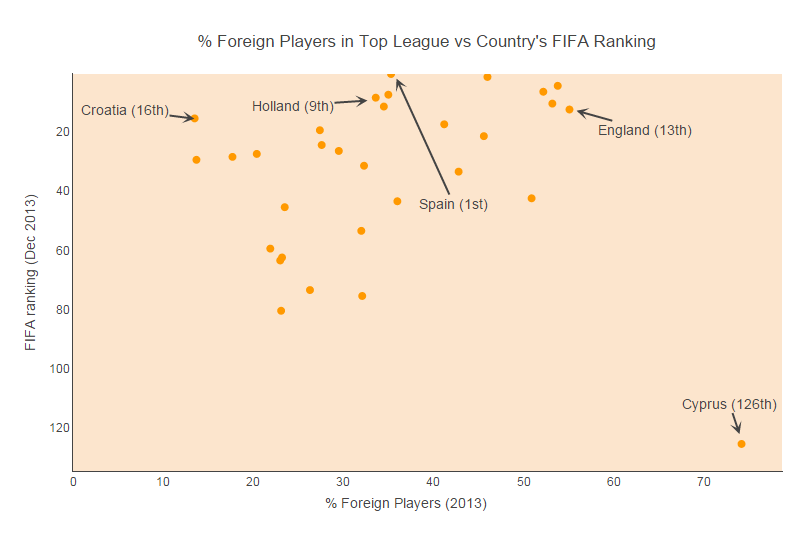 The table above shows the percentage of foreign players in the top 31 European leagues in 2013. Looking for a correlation in that data set would be like looking for an Englishman in the Spanish League. Which gives me an idea...

Instead of pointing the finger of blame at cheap foreign imports, or applying tariffs on non-EU migrant players, the FA needs to more carefully consider the global nature of the game. There are plenty of stepping stones between U21 football and the EPL: just not in England.

In my view, players wanting to progress from U21 level, but who are not yet ready for first team EPL action, should seriously consider moving to the continent. Teams in other leagues would be great training grounds for these young players, as well as shop windows. There are opportunities in Spain, Turkey, Holland, Russia, etc. for young players to develop. Players could experience first team football, play in front of large crowds and both hone their skills and develop new ones.

I'll agree with Mr Dyke on this: "If we want to maintain a national side capable of competing against the world’s best, we need change". Mr Dyke and the FA should be looking at ways of getting our young players out cutting their teeth in the European leagues.

Or they could sit on a bench in Manchester, London or Liverpool making up the 'home grown' numbers.